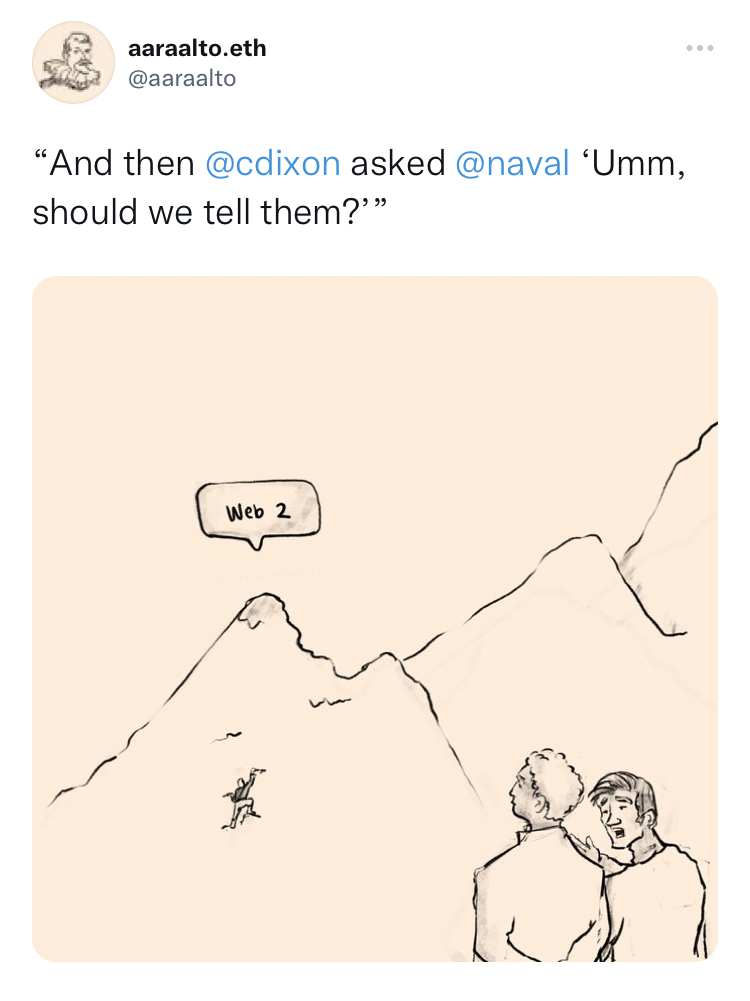 The internet is changing, and it’s changing at a very rapid pace.

Unless you’ve been hiding under a rock in the last year or so, then you might have heard of the biggest buzzword being shared around lately: crypto. But what exactly is it? And more importantly, should you even care?

A Google search will just lead you to one rabbit hole after another, so we will try to sum up the essentials as best as we can. There’s no better place to start than with these three areas: blockchain, cryptocurrency, and Web3.

To understand crypto and Web3, let’s take a deep dive first into the underlying technology behind it: blockchain.

How does it work? Think of the blocks like links in a chain, and every link contains a transaction data. This link/block is created using a series of functions that provides unique identifiers to it (time stamp, unique code, etc.). It then connects with another block through a node that verifies and secures the link between blocks. The block that follows it will then contain the previous link's identifiers, on top of its transaction data.

What makes blockchain promising is the fact that it’s a network that runs itself through a protocol which enables for transactions to be confirmed without the need for an external authority. Instead it relies on computing power of the distributed network to validate and verify each block before it gets added to the chain.

Another important thing to understand here is that these blocks cannot be changed: once it’s confirmed it then permanently becomes part of the chain. No one can just go back and edit the records - to change a block means changing the entire chain, making it immutable. These qualities of the blockchain are just a few things that make it powerful and secure, which is why there’s a growing trust on this innovation.

Why does it exist? The idea of blockchain has been spreading around as early as 1991, thanks to the promise of cryptographically secured chains and its implications. But the concept of the blockchain that we know now was fully cemented in 2008 by an unidentified person only known as ‘Satoshi Nakamoto’, who then implemented the first blockchain the year after using Bitcoin. This gave way to a full exploration of the technology and Bitcoin by the early adopters. It also eventually opened the doors for other innovations such as smart contracts within Ethereum, as well as a new generation of cryptocurrencies and applications which is where we’re at today.

Blockchain networks are the driving force behind the future of the internet, which is Web3. So what the heck is crypto and what does it have to do with anything?

Recently you may be hearing more and more of the terms cryptocurrency, cryptoassets, tokens, or crypto coins. Maybe you’ve seen it on the news or a few of your friends can’t stop talking about it after making some investments last year. The world of crypto can be confusing, but most of the time people refer to the same thing when using these terms. For the sake of this post let’s just use the term “cryptocurrency” or crypto.

Essentially crypto is a digital currency that exists within the blockchain. It serves as an asset that can be used for investment and trading purposes, to store value, or to make purchases online.

How did crypto come to existence? How are they made? Cryptocurrencies are created, minted, and maintained through the process of mining.

Why is it important? While most people are focused on just the increasing financial value of crypto, it’s the underlying technology and its potentials that we should really be paying attention to. The general consensus is that crypto is the next greatest innovation after the invention of internet. Blockchain, and in turn crypto, enables a decentralised future: It is set to disrupt the social, economic, and financial landscape by taking out trusted intermediaries and giving control back to the people. In a crypto-powered future, there might not be a need for traditional banks and bank notes, a new generation of asset classes will come to life, or an overhaul of digital platforms might occur. And this is starting to become evident through DAOs (decentralised autonomous organisations), DeFi (decentralised finance), and NFTs (non-fungible tokens).

Should I get into crypto? There are many cases made against crypto as an investment asset, one being that it’s just a bubble, that it has no intrinsic value ,and will likely cause another massive market crash. However in the past few years cryptocurrencies yielded generous rates of return due to an increasing demand, making them the asset du jour to retail and institutional investors.

There are two important cryptocurrencies leading the market: Bitcoin and Ethereum. Bitcoin is more of a store of value type of asset and is touted as digital gold, while Ethereum goes beyond that and is being used to build digital applications on top of it. They are not complementary nor do they compete with each other - they are just different but both highly valuable. Some crypto enthusiasts are more bullish about Ethereum than Bitcoin because of the other innovations that can be built on it, meaning more networks and layers are coming which will likely drive its value through the roof.

How can one get cryptocurrencies? The most common way to acquire cryptocurrencies is by buying them from popular crypto exchanges such as Coinbase, Binance, Kraken, and Gemini. However in the early days (around 2015) people used to mine them, but this proved to be unsustainable in the long run for individual miners: As the network scales and more and more transactions are added to the blockchain, the hash rate increases and it becomes exponentially harder to mine.

Now we’ve gone through the basics of crypto, on to the last bit. It’s important to be familiar with crypto before moving to Web3 as “tokens are to the Web3 what websites were to Web1”.

Web1 is the internet of the early 2000s, a virtual world filled with individual static websites and emergence of content, and a place where Yellow Pages was basically replaced by Google. Then there was Web2, the height of mobile phones, big data, and social media, and where internet felt more personal. This is where we are now, and quickly transitioning to Web3 which is the reimagined internet of the future. 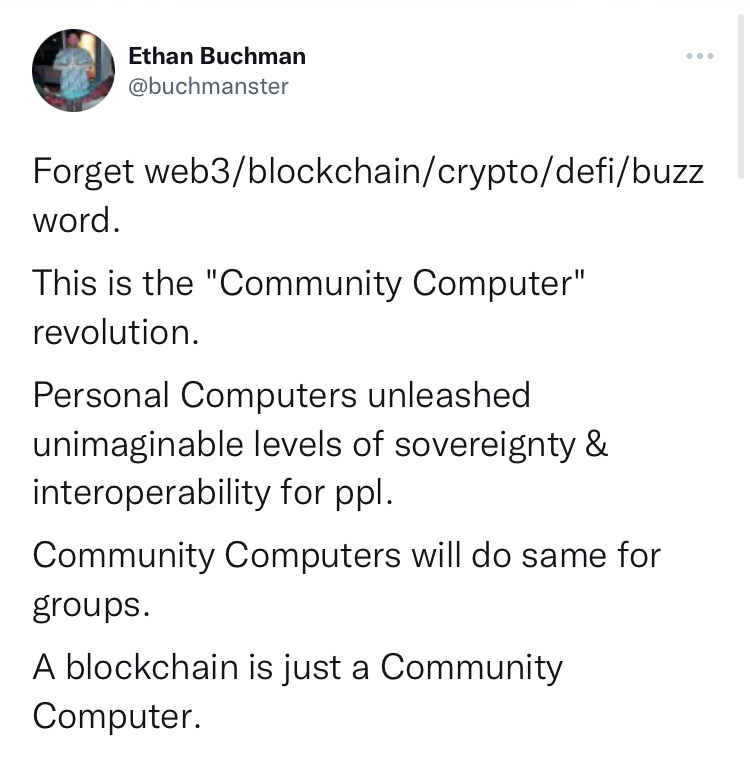 Web1 is the internet of the early 2000s, a virtual world filled with individual static websites and emergence of content, and a place where Yellow Pages was basically replaced by Google. Then there was Web2, the height of mobile phones, big data, and social media, and where internet felt more personal. This is where we are now, and quickly transitioning to Web3 which is the reimagined internet of the future.

Why does Web3 matter? Tokens are to Web3 what websites were to Web1. With Web3, the landscape and the experience of the internet that we know now is about to change on a massive scale. Crypto is the protocol layer living inside blockchain, and Web3 is be the application layer. Tokens will therefore represent the property rights as well as the incentives that will design the way we interact within Web3, and this breeds a new type of digital ecosystem. Builders, users, and creators can become their own economies, and tokens are the currency. This could look something like content creators moving out of Youtube and directly rewarding their followers on their own platform, users lending hotspot connection to the public via a decentralised host, or music artists releasing an exclusive track as an NFT. 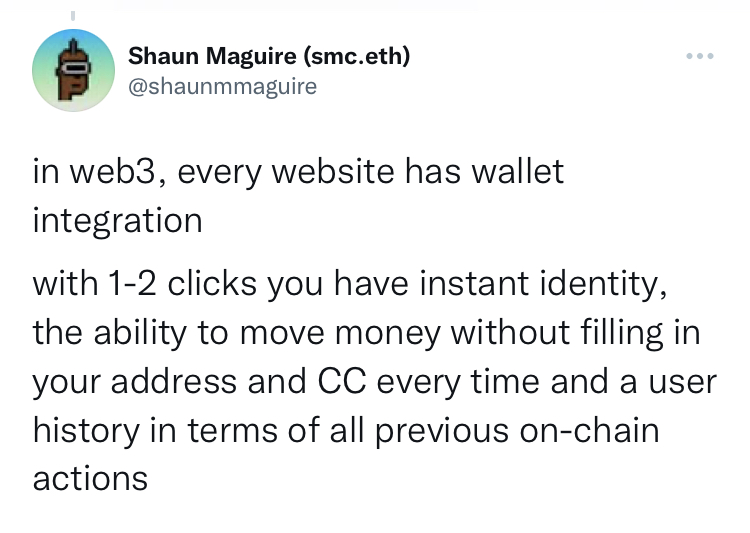 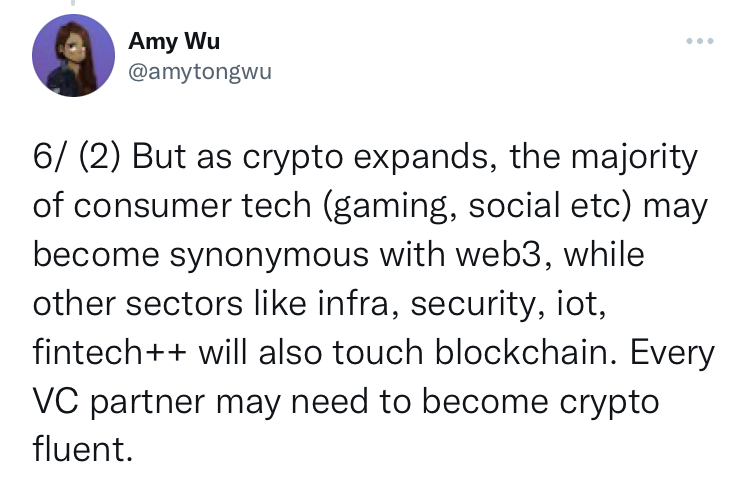 Web3 is tricky to fully grasp right now, partly because it’s characterized by its components rather than its sum. We can’t see the big picture yet because the possibilities are endless. And since it’s a movement driven by a distributed network of users, it can also mean different things to different people.

It’s still early days, but one thing is for certain: In a few years it will eventually be as ubiquitous as smartphones and social media, as signalled by individual and institutional adoption. What we’ll also get to see more is how businesses will be affected and disrupted thanks to this new type of internet - something to watch out for in our future posts.